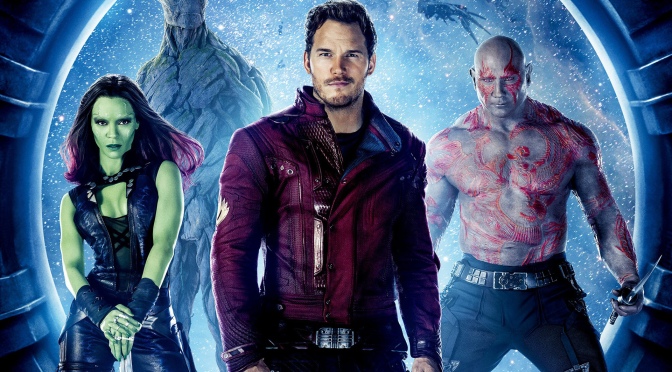 Everyone love Comics, and when they are as life-sized as ‘Guardians Of The Galaxy‘, you don’t have any other option left, other than love.

I watched ‘Guardians Of The Galaxy‘, this weekend. Actually I was planning to watch ‘Expendables’, but instead went ahead with ‘Guardians..’. As luck would have it, my kids loved it more than I do. Specially Otu, as he is fond of Raccoons…. are you listening Bradley cooper, my son loved your work in the movie, and he is the one who is always hard to please. 😛

‘Guardians Of The Galaxy‘, is based on the superhero comic of Marvel Comics by the same name. This movie is produced by Marvel Studios and directed by James Gunn, who has also written the screenplay. This movie stars, Chris Pratt as Peter Quill, Zoe Saldana as Gamora, Dave Bautista as Drax the Destroyer, Vin Diesel as Groot, and Bradley Cooper as Rocket. They all make a team of superheroes coming from different backgrounds and having mixed ambitions.

Story revolves around, Peter Quill, who after the death of his mother got abducted by a set of alien thieves/space pirates. Peter grew out to be a thief himself, stealing an Orb, to sell it in the space market for profits. But, that Orb was not some ordinary Orb. It had the power to destroy every planet and give immense power to its beholder. This is why the main villain of the movie, Ronan, is also after the same Orb. Needless to say, Peter made a lot of enemies in the process, who all are contending to get an hold on that Orb.

Peter along with Saldana, Rocket and Groot, got imprisoned by the Nova Corps, where the group meet Drax the Destroyer, who wants to take revenge of his family murder from Ronan. They all form a team, a team of Superheroes to save the Orb, actually to sell it to highest bidder, and stop Ronan from destroying the Planets. 😎 Saldana who was earlier a part of Ronan’s evil empire, has come a long way from her sister Nebula and Ronan’s immoral ways. She wants to stop Ronan at all cost. So, she persuade the superhero team to break out of prison and go to Knowhere, where they can sell the Orb.

Rocket who is a genetically engineered Raccoon, and is also a bounty hunter, devise a plan for the team to get out of prison and go to Knowhere. His tree friend, Groot, who is all heart and muscles too, assist Rocket the Raccoon, in this plan.

I don’t want to spoil the story much, so go watch out the movie to find out what happened to the Orb, and our superheroes? Did they make out of the prison, and what happen to evil Ronan’s plans?

What I like most about this movie, is off-course, cute Peter Quill. He is not a superhero kind of superhero, but rather a cute guy with all his boyish charm and cool dance moves, showing his skills on grooving to 70’s songs. He is less of brain and more driven by impulse. Yes, he is lovable. A silly superhero with all the good looks.

I am not much impressed with our green beauty, Saldana. She seems cold and lacking emotions, but fast and fiery. I loved Groot and Vin Diesel voice too.

He is a kind hearted soul who delivers his lines, ‘I am Groot‘, with so much passion that you fall in love with him every time, he opened his rooty branched mouth. I loved him.

Rocket the Raccoon is funny, having some of the best one liners in the movie. He is the cool dude of the movie, who is always making Drax the Destroyer, run after him. It a good fun to see both of them in a single frame.

Overall, this superhero comic movie is not as extraordinarily as Avengers, but it does has it’s moments, where it will make you laugh, and when you will come out of the show, you will come with a grin on your face. 😀

One thought on “Tuesday Talkies – Guardians Of The Galaxy”