BJP has won Uttar Pradesh legislative assembly elections with a mind-boggling never-before kind of performance. With BJP+ winning a total of 325 seats out of 403, it has emerged as the single largest party in Uttar Pradesh elections, 2017.

What makes this win more remarkable is the fact that no one was expecting it to be this grand. Neither the exit polls nor any political pundits predicted this huge win for BJP.

BJP workers, leaders and followers, all are elated, and why not? Combo of Modi and Amit Shah has delivered the impossible.  With Akhilesh’s Samajwadi Party(SP), and Mayavati’s Bahujan Samaj Part(BSP) losing many of their traditionally trustworthy seats to BJP; a question that is coming to everyone’s mind is, have Muslims and Dalits finally softened towards BJP?

Answer is not a simple yes or no here. It may only seem like Uttar Pradesh has risen above the caste and religion based vote bank politics. But, the reality is far more different. Then how come BJP was able to pull out a victory like Deoband? 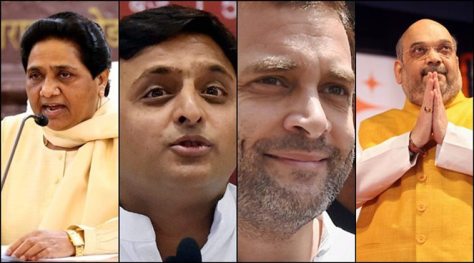 I hate to use terms like ‘Muslim or Dalit’ votes; but if we have to understand the voting behavior of UP population then one cannot ignore these terms. As even if Muslim votes constitute only approx. 19% of the total votes; they along with the Dalits, have been a major force in deciding who will sit on the Chief Ministerial seat of Uttar Pradesh.

Surprisingly, other than BJP, all the other parties have tried to woo this 19% of vote bank. Be it congress, SP, or BSP; and they have done it successfully too in the past. The main reason behind this was that Muslims and Dalits have always shown a unified support to one of these parties in the past; giving the said party a major advantage in elections. Their collective support against the undivided support of rest of the votes had turned the tide in favor of their supporting parties in the past.

This happened in past elections too. Once when Muslims and Dalits unified their votes to make BSP supremo Mayavati win the UP-CM post. But in her 5 year tenure all she did was to create huge statues of herself and Kanshiraam along with gigantic elephants in the name of beautifying UP. She did helped Dalits in getting government jobs but that’s it. Her lack of vision in doing something more long lasting for Muslim and Dalits, failed her miserably; as in next elections Muslims vote unified with Yadav’s to give SP’s babua Akhilesh Yadav a chance to become youngest chief minister of state. 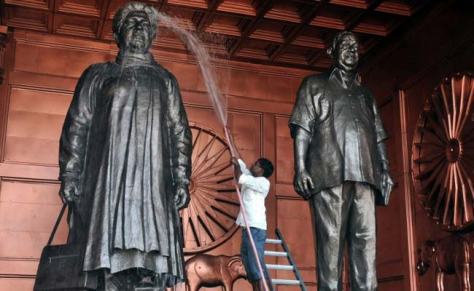 Expectations were very high with this young and educated Akhilesh, but alas, he had the vision but neither controlling power of his own MLA’s nor the proper execution skills. He was not able to deliver much. When he said, “Kaam bolta hai”, only thing speaking was a single highway in his 5-year tenure as CM.

Furthermore, his split/no split drama with his father and uncle also divided the line between the true loyalist Yadav voters and the educated Yadav followers. This whole family soap opera looked merely a distraction to avoid embarrassing questions on lack of development. In-fact the old loyalist of Neta ji felt that babua has cheated on the legacy of his father. He is not the right candidate to take this party further ahead.

Akhilesh too didn’t delivered to his promises to his voters. Final nail on coffin of SP was hit by its alliance with Rahul Gandhi’s congress.

Congress?? What?  What to discuss about nonexistent things?

A non-delivering SP, and a non-promising BSP were not enough to stand against a fast-paced BJP lead by a charismatic leader Modi and mastermind king maker Shah.

Shah has chosen each contesting candidate by himself. Coming to his true form, he didn’t give a single seat to any Muslim candidate. His focus was neither Muslims nor Dalits, but the OBCs and rest of Hindus. This was deliberate as BJP know it very well that it is hard to impossible for BJP to get Muslim and Dalit votes.

19% of that Muslim vote has still not voted for BJP, but what the rest of the voters voted for is quite clear with the mandate. Jats, OBCs, Thakurs, Pandits, Vaishya etc. have turn the tables now. 19% don’t matter when you have more than 50% with you. This was the election between minority and majority; and this time majority was unified against non-development.

BJP can really cash it in future elections too, especially in coming 2019 election. But, for that BJP must truly deliver on its line of development – “sabka saath sabka vikas”. As in one interview Modi has himself said – if I will build a road, it will not be for Hindus only. Every religion, every caste will benefit from development. So, my focus is on development.

Let’s see if BJP can deliver on its promise. My hopes are high. What do you think?

6 thoughts on “Decoding BJP’s Big Win: Has UP risen above caste based politics?”