Watched two movies this last week and both of them turns out – bogus. Well, one more than the other.

So, without much ado lets delve into both the stories.

First I will talk about ‘God’s Not Dead‘, which was more of a headache than I could ever imagine. 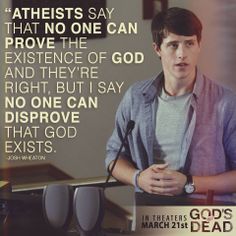 ‘God’s Not Dead’, is directed by Harold Cronk and stars Kevin Sorbo, Shane Harper and Dean Cain in lead roles. I was rather intrigued by the title of movie and this was the only reason that took a blind leap of faith to watch it, but it turned out to be a totally different kind of faith promotion. It’s a christian drama film which is made so poorly and in a preachy way to promote Christianity that after watching it, I felt relieved that I am not christian.

As I said, it is preachy; but not only that, its underlying agenda is like to force you towards Christianity. Theme of movie is, if you are Christian than you must be very kind and helpful, in total a good human being; but on the other hand, if you believe in any other kind of God, then you are devilish. You must be cruel and woman abuser or merciless. Well, message is something else, but if you rate this movie based on just its execution then also it’s a failure. All the scenes are artificial and novice, specially the climax of the movie with death of professor. Save us Jesus from these preachy movies.

Time to move on. Let’s talk about our second film – ‘The Quiet ones’.

I love horror movies. They offer something different and make you react. This one is good too but in parts.

It’s whole idea of treating a troubled girl by a professor is indeed cool and refreshing. It shows what was the perception of people towards such supernatural events and personalities. Story proceeds with the help of a cameraman who is recording all these activities and treatment experiment to help professor receive Nobel prize. In the process, he falls for the troubled girl and uncover a dark secret about her, which torments belief of professor and his whole experiment.

This movie has it’s fair share of chills but its shabby camera work, which is deliberate, is kind of distracting. It looks like that movie could have gone in so many direction but in the end, story take some unexplained and illogical turn. You don’t understand the reasons, as if whole motive is changed somewhere.

“The Quiet Ones’, is directed by John Pogue and stars Jared Harris is lead role of professor. Movie is based loosely on a real life event/experiment.

Not great but fun to watch just for the sake of some horror chills.