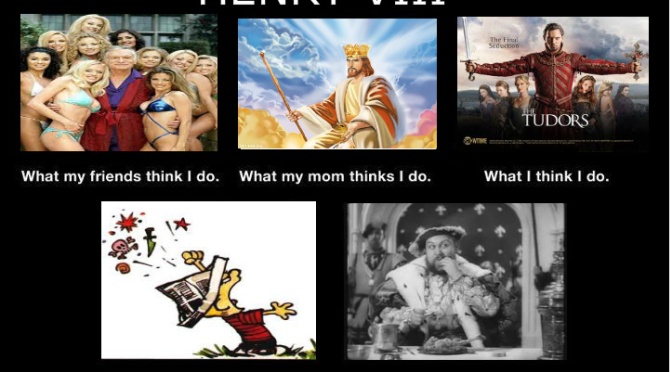 King Henry VIII, was the second Monarch of Tudor dynasty. He was King of England from 21 April, 1509 until his death by 28 January 1547. King Henry was famous for two main reasons – one for separating Church of England from Roman Catholic Church; and second reason, he was most notoriously famous for, was his Six Wives and their fate bestowed by King Henry. Earlier posts were dedicated to Six Wives of King Henry VIII. Today, we are giving King Henry a chance to put forward his version of story.

I am King Henry VIII, The King of England. Actually, I was the King, now I have heard there is a Queen ruling My England. :O

I was born to Henry VII of England, and Elizabeth of York, on 28th June, 1491. I was second in line to the throne, having my elder brother Arthur, but Arthur demise changed the equation and I became the King, after my father King Henry VII, died in 22nd April, 1509. I don’t want to gloat much but I was the best King, England has ever seen…. 😎

You may or may not have anything else to do, but I have some important business to attend to (have to play execution with my graveyard friends), so I will directly come to point. I am disgusted by the way, my Six Queens have described me, in earlier posts. So, here I am clearing everything, once and for all… although I know there is no such need, because I am a King. 😛

Those were my six wives, I could have married more… I would have loved to, but my illness prevented me. I was a man longing for love and solace. I found it somewhat in Jane, but like each time, my happiness were always short lived. I was always alone. A lone King. Although I married six times, but I was never satisfied in love. I may have loved my wives or maybe it was just an illusion, I wonder. If given a chance, I think, I would prefer to be a loving husband, than to be an insecure and tyrant King.

Wife # 4 – I am Anne Of Cleves, Fourth wife of King Henry VIII

A better Wife or a smart Sister??

Have you ever heard of something as weird as this; a wife whose husband termed her as his loving sister?? 😛

Well, if you are any one of King Henry’s wives, than anything can happen with you. 😐

Till today no one knows if I was the smartest of Henry’s wives (to survive this long, you know), or just the dumbest to leave the Queen‘s title so easily. Well, you have to read ahead before guessing. 😉

I, Anne, was born to John III and his wife Maria, on 22nd September, 1515. Better to tell you now, that I was the one and only German wife of King Henry. I was contracted to marry some other fellow, but you know when Henry wants you, there is no force in the world who can prevent it.

Jane died, poor soul, and King was without any wife for two years. Some say that he was mourning Jane’s death (his third Queen), but I must tell you in secret, that it was rather the opposite. He was so eager to marry, that only after a month of Jane’s dying, he started looking for a suitable girl to marry. But, Henry’s reputation followed before any of his marriage proposals, and no one, I am saying it again, No One, wanted to marry that cruel King. 🙄

Now, you must be thinking, how did I agreed to it then? Well, I was an idiot. You see, I was not educated, know little of English, and had no interest in worldly affairs, so I was unaware of Henry’s laurels till I landed in England to marry him. Then it was too late. 😕

He didn’t wanted to marry me before seeing me, that guy was not into arranged marriages, you see, so, he asked Holbein, some painter of his, to sketch me. Just look at it… am I not pretty?

Well, Henry also thought so, until he met me in person. 😳

It happened like this; I was so tired after a long sea journey, not accustomed to English customs and courtesy, I just wanted to rest, when a courtier told me that some men from King, are here to give his gifts. There were four of them, or maybe five, I don’t quite remember now. They came to my chambers, and one of them, the fatty one, actually grabbed me and kissed me. 🙄 How could he? Is this the English custom to kiss your future Queen forcefully. I was so despised, I totally ignored him. BTW he was smelly too.

My Bad…. He was the King, himself, disguised to play a prank on me. Guess what, the prank misfired. I was repelled by him, and so did he. How could I have guessed that this fatty, smelly, old fellow, almost reaching his fifties, could be my future husband; me a damsel in her early twenties. Ewww…. (okay, I am exxagerating abit… but so what, this is my story) 🙄

We got married, as there was no out for Henry this time, but that oldie had already made himself clear, that he didn’t liked me. Our wedding night!!! How could I ever forget it. Well, actually I can, because nothing happened. Nothing. 😐

I think, it was just that he didn’t liked me. I was not graceful, I will give that to him. I didn’t knew music or dance, or even knew much about card games. Everything that Henry was fond of, I was lacking it. I didn’t even knew how to flirt. I was a novice in love games.

He wanted to get rid of me, and actually I wanted too, but I also wanted to be a Queen. 😦 So many gifts, jewels, and maids at your service, who wouldn’t want that?

Our marriage was not even 6 month old, when he send me an annulment notice. As marriage was not consummated, it all make sense. Now, coming to the question, that was I a stupid dumb girl or smart enough to agree to King’s wishes? Well, I was smarter. 😎

I decided, I don’t want to get married to this smelly oldie and I still want to enjoy all the luxuries of life; so, why not make the King happy (the other way possible), and give him, what he wants? I chose to become his sister, rather than his wife, and get beheaded. 😛 No, never. I loved my life. A sister, I decided.

Thus, I become, sister to the King, my ex hubby. It did had it’s privileges though. I was given a generous settlement, castle, gifts, jewels, and also honor of being the second most important woman, royally, after the Queen, and King’s daughters. I was Happy. Who would want to go back to German hole, when you can live just like a Queen in England, and also got to keep your head intact. 😉

About, keeping my head, I outlived every Queen of Henry’s, and Henry too. Was I just lucky, or smart enough to keep my peace with the most notorious King of my time? Do I have to spell it out more clearly?? 😉 😉