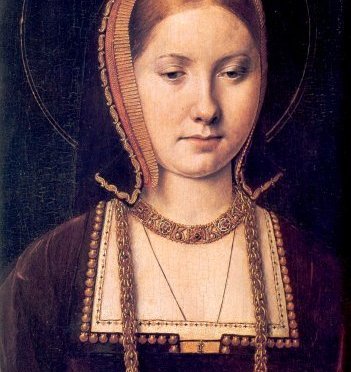 Wife # 1 – I am Catherine of Aragon, First wife of King Henry VIII

William Shakespeare called me “the Queen of earthly Queens”, now when I am in earth, I think of only that moment when I became The Queen of England.

I was just three-year old, when my parents finalized my marriage. Yes, just three, only a child, and my fate was sealed, as the future Queen of England, and to be wife of Prince Arthur Tudor.

Commoner may think, how lucky we Queens are, but just think of it, I was not even asked about my opinion for marriage. Infact, even if they would have asked me, what would a three-year old child, will say about her marriage. 😕

I was happy. Too happy. I was going to be future Queen of England. I danced, learnt all possible languages I can, history, religion, civil, philosophy… there was nothing I had not read about. I was very lucky in that sense, as many of my contemporaries were not allowed to read at that time. Some even said, that I was educated more than my Husband King Henry. 🙄

You must be thinking, how come I was contracted to marry Prince Arthur, and married Henry instead? Well, I did married Prince Arthur, but that pale looking fellow, died in just five months of marriage. We didn’t even consummated our marriage. Urggh…

I married Henry, younger brother of Arthur, and six years younger to me.

Actually, he married me. 😉 I didn’t had any say, remember. Henry and his father didn’t wanted to return my dowry (I have bought with me 200,000 crowns as dowry, along with African servants, which I was the first to do so), and to top it all, I was beautiful, way beautiful. 😀

I had fair skin and red-golden flowing hair, short height but beauty like that even Thomas Moore said that “There is nothing wanting in her that the most beautiful girl should have.” Told Ya 😆

But I was not just an eye candy, I have also fought a war for my King Henry, and won.

Henry was the love of my life. I have only loved my God, other than Henry. Even Henry could not deny my love to him. Only thing that was denied, was a male heir to England’s throne.

I had six pregnancies, but only one, Mary, my daughter survived. None of my son lived. With them, Henry’s love for me, died too. 😥

Why it’s so important to have sons? Why can’t a girl is enough, to carry on your family genes and be your rightful heir? I could never have accepted this undignified ideology towards my daughter Mary. She was the rightful heir, and I told my wishes to Henry also, quite clearly.

Guess what? It was not the question of heir, which was keeping Henry away from me. It was that b#$@h, Anne Boleyn. She was my lady-in-waiting, at my court; and she bewitched my dear husband, to fall in love with her. 👿

Not that Henry was innocent, he had 3-4 mistresses before, but this time it was different. He asked me for divorce, and for me to go to nunnery. What??? After 18 years of marriage and one beautiful child, how could he? He even forgot that divorce was not allowed in Catholicism? I will be his wife, till death do us apart.

He was not my sweet Henry anymore. I didn’t even recognized this new Henry, which he had turned into. One who rose against the Roman Catholic Church, and declared himself above the church itself. He was out of control. Killed everyone who believed in Catholic Church and Jesus, burnt them, executed them, hanged them. For what? To marry Anne Boleyn, or to have a male heir, or just to get rid of me? 😐

He divorced me. Got the marriage annulled, saying it was invalid, as I was his brother’s wife, first.

Punished me, by not allowing me to see my only child, Mary. He kept me in his castles, closed, with nearly no help and money. But, I was always a Queen and never signed to his will of declaring my child a bastard. I didn’t, and will not say, ever, that my marriage was invalid. I was born to be a Queen, and I died, on January 7, 1536, as a Queen.

I just said this to my Dear Husband, as my last words – “Lastly, I makes this vow, that mine eyes desire you above all things.”

I don’t know if I am “The Queen of Earthly Queens”, as Shakespeare had put it, but I was certainly Queen of England, and will always be remembered as Queen.