“A life of leisure and a life of laziness are two things. There will be sleeping enough in the grave.”

A lie of being someone else. A lie to see your son, in the face of a total stranger.

After watching this documentary movie, it took me an hour going through all the articles and interviews of the persons involved, to convince myself, that this was really a true authentic story and not a fiction.

Imposter, directed by Bart Layton, is a documentary based on the 1997 case of Frederic Bourdin, french national, who impersonated a missing American boy, Nicholas Barclay. Why this case is special, I will tell you later, but why this documentary is special, because it is so far being treated like a documentary.

Bart Layton has shown this story with both main protagonists sharing their views, and at the end this makes you wonder, if the victim is really a victim here?

Story is so riveting and thrilling that you will not believe it even when at the back of your mind, you always knew that this is based on a real life event.

Nicholas Barclay, a 13-year-old Texas boy went missing in 1994, never to be found, until one day a phone call from Spain says otherwise.

Bourdin is a 23-year-old man, who makes his way through life by impersonating teenage boys and living in child shelters. His life of lies is going on too well, until one day Judge asked him for his identity or go through finger print identification system. Fearing that he may get caught and imprisoned for life, he soon blurt out a new story that he is actually American and got kidnapped from there to Spain.

Through his ultra sharp mind and super cunning convincing skills he manage to strike gold when a missing boy from Texas, America, Nicholas Barclay seems to have the same description as Bourdin. Authorities now took control and lie is now so out of control that now even the creator of these lies, Bourdin has no power over it.

He tries to go with the flow, changing his color blonde, tattooing his hands, covering his eyes with big dark goggles and hiding himself in layers of clothing. But, are these enough, to fool a loving sister who has not seen his brother for last three years?

Nicholas’s sister didn’t even flinch seeing Bourdin for the first time. Infact she shows him all the family photographs detailing on every family member possible. It was enough for Bourdin to pass the authorities and acquire a US passport and citizenship.

His so-called mother, uncle, cousins…. everyone is convinced that he is Nicholas. Is he that good an actor/impersonator? Maybe.

Gaining confidence like never before, Bourdin’s tales now encompassed torture and sexual abuse by military personnel and child traffickers, raising alarms through every section of community from media, to private investigators and FBI too.

A private investigator suspecting story of Nicholas’s escape take special interest in this case and soon share his doubt to FBI agent Nancy Fisher, that this Nicholas has different ears than the one who went missing 3 years before. Nancy took this investigation further and take Nicholas to a forensic scientist, who also confirms that this Nicholas is a fake and is not raised by an American family. Only thing now needed to do was check his DNA and confirm all the allegations.

But, Barclay family denied. Nicholas’s mother refused to give DNA samples saying, “We know who he was”.

Why would you keep a total stranger in your home, when everyone including government is saying that he could be dangerous, in fact a spy or a terrorist?

A mother/sister no matter how desperate they are to get reunited with their long-lost family member, can ignore drastic differences of physical appearances of impersonator.

Nicholas had blonde hairs, Bourdin had black dyed blonde. Within their 3 months of stay they couldn’t see the color of his roots.

Nicholas would have been 16 if alive, and Bourdin was a 23-year-old man.

Nicholas had tattoos when he was 13, Bourdin had them fresh.

Most importantly, Bourdin didn’t recall anything from his past life. His school, his friends, his memories all lost. His accent totally different. Everything was different.

This documentary leaves you with so many questions. Most revolting is the one who Bourdin himself raised to authorities after being imprisoned for his deeds. He told them, that Barclay family has killed real Nicholas and they accepted him in their family to hide this gruesome killing.

Who is a victim here? Who to believe?

We may not know all the answers, but this story is far more thrilling than any other film story.

Ever stuck in a situation where your kid is just out of control and you are looking helplessly. Here is the help you want for these kind of situation –

Tips to Handle your Kids Temper Tantrums at Public Places.

“Journey is better than Destination”, this quote is apt for movie, Oculus.

Oculus is a critically acclaimed horror movie, directed by Mike Flanagan, who has also developed a short film before, based on the same concept.

Mike Flanagan directed a short film called “Oculus – chapter 3 – The Man with the Plan”, which became the underlying theme of this terrifying and brilliant horror film – Oculus.

Oculus stars Karen Gillan and Brenton Thwaites in the adult roles of siblings Kaylie and Tim respectively while Annalise Basso and Garrett Ryan play as 12 and 10 year old Kaylie and Tim.

Kaylie is convinced that it was something supernatural in the antique mirror that their family had, which resulted in murder of her Father Alan, and Mother Marie, some 11 years back. While her brother, Tim, who has just recently came out of a psychiatric hospital, denies every involvement of supernatural in his parents death. Kaylie decides to take revenge of their parents death and devise a plan to kill the evil. Tim, reluctantly agrees to help her.

They go back to their old house along with the evil Mirror and try to shoot the footage of evil mirror in action. They also devise a plan to automate destruction of the Mirror, in case anything bad happens to them.

Tim who was initially not in favor of Kaylie superstitious belief, gave up, when he also start seeing tricks played by the mirror. Soon, both of their lives get intertwined with their past; their younger selves. Everything seems untrue, yet so true. They start living in past, seeing their father changing into something evil, and their mother losing her mind and ultimately everything.

This is the highest point of horror that this movie has provided. Oculus just messes with your mind. It was mirror who is playing all the tricks but it is the concept laid out by Mike Flanagan, which takes the drama to a new height. With past and present intertwined, you will feel like part of an unsolved puzzle, which is getting mysterious with every scene. You want to scream for the kids; you want to help young Kaylie; you want Tim to kill that evil mirror; you want to do so much with this movie. 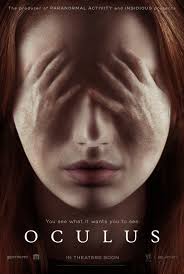 And there is the big THUD!!!

Movie does nothing. It has the most plain climax that any horror movie can have. I was just disturbed by the way this marvelous movie get treated in the end. Oculus deserved a much better end. Sigh!!!

At the end it just looks like that director wanted to make prequels and sequels of this movie; that’s why he has left so many questions unanswered in this movie, as if they want to leave their audience hanging in middle. But, to say honestly, this doesn’t look like a good idea.

Oculus is now an unfinished business for me. I hope they try to do justice to Kaylie and her family; and would give a proper end to monstrous mirror in the sequel.

“People will amaze you, as they will speak something, and do something else. To maintain your sanity, do not believe in words but rather action of others, do not fall for pretty faces but for the ones having nicest behavior.”

My Journey So Far….
Blog at WordPress.com.
Loading Comments...